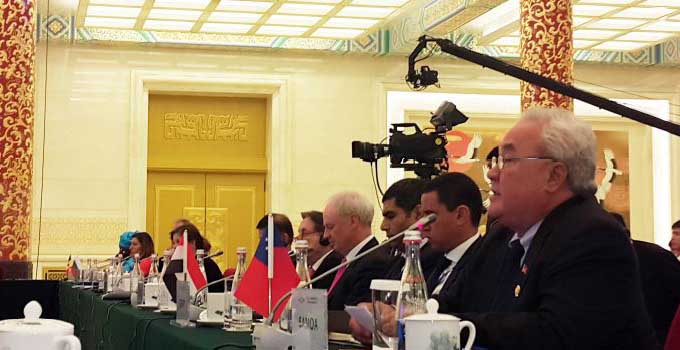 Samoa took part in the First World Conference on Tourism for Development, which was held on the 18th to the 21st of May 2016 in Beijing, China.

Jointly organized by the Government of the People’s Republic of China and the World Tourism Organization (UNWTO), the Conference was held under the overall theme “Tourism for Peace and Development” and featured discussions on major issues that are closely linked to the 2030 Agenda for Sustainable Development and the Sustainable Development Goals (SDGs), including the contribution of tourism to poverty reduction and peace.

On this occasion, China, as chair of the G20, also hosted the 7th T20 Ministers’ Meeting under the theme “Sustainable Tourism – An Effective Tool for Inclusive Development”, in which Hon. Lautafi spoke about sustainable tourism in Samoa.

“Samoa as you are aware is a South Pacific Island Nation of 190,000 people where the recent Small Islands Development States (SIDS) Meeting was held in 2014.” Said Lautafi.

“The Theme of Sustainable Tourism is timely in all global conferences and forums and we are proud to have been involved in the promotion of the UN International Year of Sustainable Tourism 2017 and wish all well as we progress to ensure that the world becomes fully aware of the contributions, that this ancient and cultural phenomenon called Tourism can play in enhancing the lifestyles of our peoples in developed and developing countries.” Said Lautafi.

As one of the fastest-growing socioeconomic sectors of our times, tourism is being increasingly recognized as a key tool for development. Tourism’s unparalleled crosscutting nature and strong links to the other economic sectors, further positions it as an

efficient multiplier in national and global development strategies. In 2015, international tourist arrivals totaled almost 1.2 billion and are expected to reach 1.8 billion by 2030, more than half of which will be in emerging economies and developing countries.

Accounting for 10% of global GDP, 30% of the world’s trade in services and one in eleven jobs worldwide, tourism is an economic powerhouse that creates opportunities to improve the livelihoods of millions.

These big numbers represent more than just economic strength—they reflect tourism’s vast potential and increasing capacity to address some of the world’s most pressing challenges, including economic growth, inclusive development, resource management, environmental preservation and the promotion of a more tolerant and peaceful society through the millions of cross-cultural encounters that tourism fosters every day around the world.

Tourism’s potential to contribute to sustainable development has been clearly recognized with its inclusion in the 17 Sustainable Development Goals (SDGs) as targets and in the designation by the United Nations of the year 2017 as the International Year of Sustainable Tourism for Development.

The Conference, which coincided with the China Tourism Day, was addressed by the Head of Government of China and brought together leaders in the areas of tourism and development to spur dialogue and create a better understanding of tourism’s contribution to development, including poverty alleviation and peace.

Samoa’s Minister of Tourism and CEO of Samoa Tourism Authority both returned in the weekend.