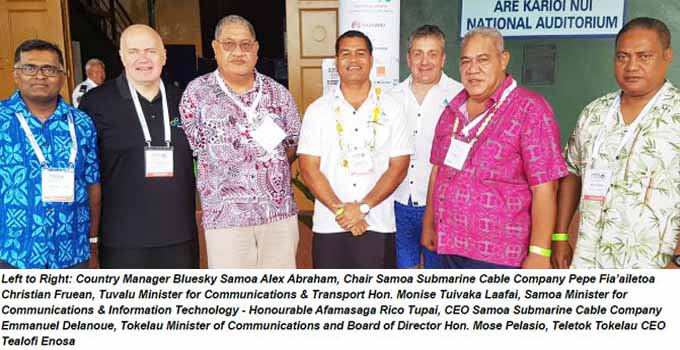 Pacific Islands Telecommunications Association (PITA) 2017 was a busy time for regional submarine cable connectivity negotiations, in addition to the announcement of the Manatua Cable consortium between French Polynesia, Cook Islands, Niue and Samoa.

PITA 2017 also saw the Strengthening of ties between Samoa, Tokelau and Tuvalu as it announced the commencement of discussions to connect the 3 countries by submarine cable and to discuss ways to improve ICT in general for the three countries.

Minister Afamasaga, leader of Samoa’s delegation said, “These discussions have been a positive step forward in strengthening Samoa’s ties with our neighboring islands to create a real and tangible regional partnership. It is expected that a standalone Tokelau-Tuvalu submarine cable connecting to Samoa whereby international connectivity will be provided via the Tui-Samoa cable system linking Samoa to Suva Fiji then onwards to USA or NZ/Australia. I believe it is the Polynesian Leaders Group (PLG) vison to connect all the Polynesian islands in order to create economic and social development for our people”

Part of Samoa’s presentation was to provide a substantive update on the progress of the Tui Samoa cable. Minister Afamasaga also stated that “the Government of Samoa are pleased to advise that the Tui-Samoa project is on track, with work already underway at the beach manholes and Cable Landing Stations in both Upolu and Savaii. Another important milestone was the commencement of the marine route survey for the 1,470 km Tui-Samoa Cable with, the survey to be completed by early May 2017”.