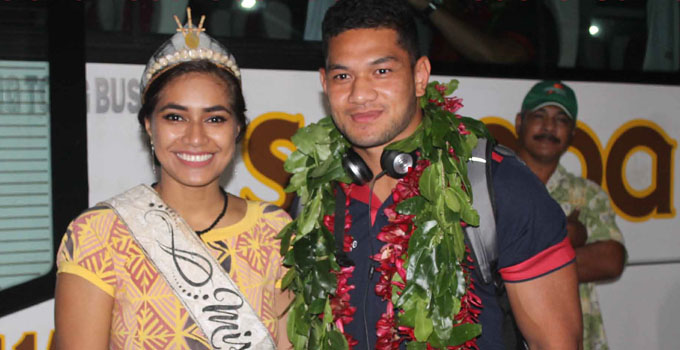 REDS VS BLUES: Miss Samoa, Priscilla Olano with Samoan born, Henry Taefu of the Queensland Reds upon the team’s arrival on Sunday morning at the Faleolo International Airport. Henry Taefu has been named as a new cap for Manu Samoa in its upcoming test matches next month against the All Blacks and Wales.

The Queensland Reds have arrived in Beautiful Samoa ahead of their rivals the Blues, to prepare for the first ever Super Rugby match to be held in the country this week, on Friday, 2nd June 2017 at the Apia Park National Stadium.

Amongst the eight Samoans in the Reds squad is 24 year old Samoan born Henry Taefu who first played rugby in Samoa when he attended Falelatai Primary School.

“I’m grateful to be back home and looking forward to meeting my relatives in my villages of Siufaga and Samatau.” said Mr Taefu, who supports future Super Rugby matches in Samoa.

“To have a Super Rugby match in Samoa is a great opportunity for our families and our country that hardly comes around, and I support this initiative and hope for future games here and show the world what Samoa offers.”

The Reds were welcomed by Miss Samoa, Priscilla Olano and the Samoa Tourism Authority (STA) staff with ulas. The team have spent their time doing rugby clinics with the local kids and engaging with the local communities.

The Blues on the other hand will not arrive until Thursday afternoon, the day before the game, but one of its super stars and All Blacks, Jerome Kaino and teammate Pauliasi Manu have also arrived in the country earlier this week tofurther promote the game and also hold rugby clinics with local kids.

The match will not only be the very first Super Rugby game to be played in beautiful Samoa, but it’ll also be the first major rugby match played under the lights at the Apia Park National Stadium, the same venue which hosted the All Blacks vs Manu Samoa Test match just a couple of years ago.

The match kicks off at 8:35pm local time (7:35pm NZ time), with tickets on sale in NZ and in Samoa starting from SAT$40 or just NZ$22. The public can purchase tickets online at ticketmaster - http://www.ticketmaster.co.nz/event/2400524d0def2f9b or locally at the Samoa Tourism Authority Office and Bluesky Samoa.