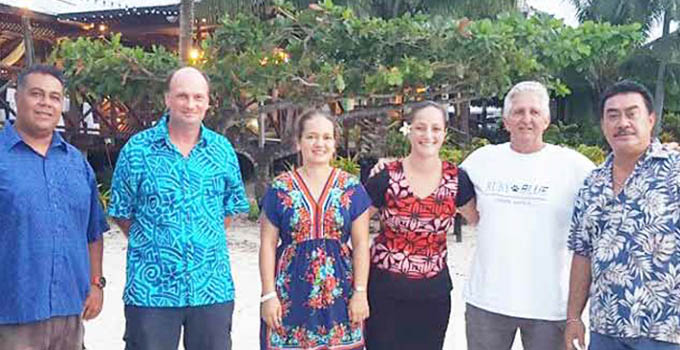 The 7th Annual General Meeting (AGM) of the members of the Savaii Samoa Tourism Association (SSTA) was successfully held on Saturday 20th May 2017 at Vaimoana Seaside lodge in Asau, Savai’i.

The AGM was attended by more than 30 members and guests from both Savaii and Upolu.

SSTA was incorporated in 2010 and it is a non-Government membership organisation that strives to be the united voice of the hospitality and tourism industry on Savaii.

President Tupa’i Saleimoa Vaai, who has now been re-elected as President, thoroughly reported on the achievements and challenges of the association in the past year.

“Without wishing to exaggerate, the past year undoubtedly has been both an active and challenging period yet again for the Executive Council and membership.” Said Tupa’i.

“As a non-profit, non-Governmental organisation the Executive Council still does their utmost to have our industry voice heard at the several committees and taskforces they have been privileged to represent Savai’i.

“Most of these committees see the close collaboration of Savaii tourism with their main partner organisation in Apia such as the Samoa Hotels Association as well as improved alliance with the government body, the Samoa Tourism Authority.”

The President also emphasised in his report the events, campaigns and fundraising activities fruitfully accomplished in the past year and those to be undertaken for the benefit of the association.

The activities included the Miss Pacific Islands Event held in November 2016 which saw the enormous support of members and local businesses, the successful Inaugural Fishing Tournament recently held in Asau in the beginning of May, the Savaii Games initiated by Seti Afoa, the support of Samoa Observer through advertisement campaigns, SSTA annual raffles and their environmental programme, Keep Savaii Clean campaign which involves clean-ups around the island and creating awareness of the environmental and social impacts of the malpractice of public littering.

The association’s financial statements for the 2016/2017 financial year was presented by Treasurer Dr. Nola Gidlow. Mrs Gidlow stressed the importance of annual membership fees in order to keep the office and information center in permanent operation, with the association fortunate to receive grants from STA & MCIL.

Included in the agenda were presentations by noteworthy companies of Digicel and EMD. The AGM concluded with a networking session over food & drinks and a raffle drawn with touchphones & phone credit prizes sponsored by Digicel.

SSTA acknowledges its sponsors of Digicel and Salafai Metal Industries for this year’s meeting.