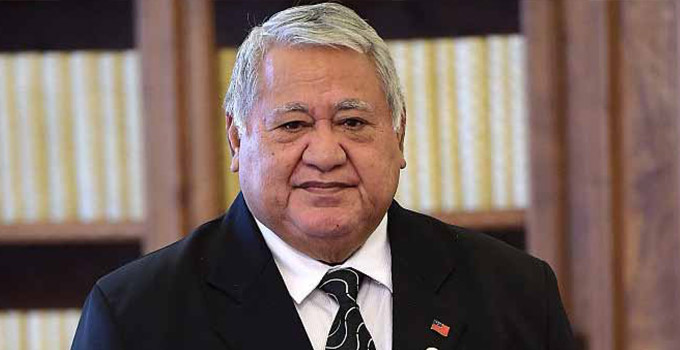 The World Tourism Organization (UNWTO) has appointed the Prime Minister of Samoa, Hon. Tuilaepa Sailele Malielegaoi, as Special Ambassador of the International Year of Sustainable Tourism 2017. The ceremony took place in New York on the 7th of June on the side-lines of the UN Ocean Conference, where among other activities the Prime Minister addressed participants on the value of tourism to sustainably advance the blue economy.

“The designation of 2017 as the International Year of Sustainable Tourism for Development was due to the recognition by the United Nations of the potential of the tourism sector to contribute to the fight against poverty, to help curb climate change, promote gender equality and foster mutual understanding and peace amongst diverse cultures” said the Prime Minister.

“Tourism is a sector that is vital to the livelihoods of our people and touches all the three dimensions of sustainable development, the social, economic and environmental aspects. As a people-to-people activity, it has helped and continues to contribute to the revitalization of our culture, customs and traditional crafts, and plays a pivotal role in the preservation of our cultural heritage and is a force that promotes peace and understanding” he added.

“The International Year is a unique opportunity to promote common action and enhance the power of tourism to build a better world. We thank Samoa for leading the initiative for the adoption of the UN resolution declaring the International Year and for its sustained, exemplary contribution in promoting the value of our sector towards the achievement of the 2030 Development Agenda, particularly for the Small Islands Developing States (SIDS)” said UNWTO Secretary-General, Taleb Rifai.

The Special Ambassadors of the Year are leaders and prominent personalities committed to promote the role and contribution of tourism in the achievement of the Sustainable Development Goals (SDGs) and the 2030 Agenda.

While tourism is included in three of the SDGs – SDG 8: ‘Promote sustained, inclusive and sustainable economic growth, full and productive employment and decent work for all’; SDG 12: ‘Sustainable Consumption and Production’ and SDG 14: ‘Conserve and sustainably use the oceans, seas and marine resources for sustainable development’, it can advance all 17 SDGs.

The Ocean Conference was an opportunity to highlight how tourism can effectively contribute to Goal 14. UNWTO joined the World Bank and the UN Department of Economic and Social Affairs (UNDESA) to discuss and launch the report ‘The Potential of the Blue Economy: Increasing Long term Benefits of the Sustainable Use of Marine Resources for Small Island Developing States and Coastal Least Developed Countries’.

UNWTO was also co-organizing a Side Event on the “European Union tourism committed to Blue Growth” on the 8 June with DG MARE and NECstour. Coastal and Maritime Tourism is one of the key sectors of the European Union Blue Growth Strategy with a high potential for sustainable jobs and growth.

Tourism employs over 3.2 million people and generates a total of 183 billion Euros in gross value added, representing over one third of the maritime economy. The universal dimension of the SDGs provides the EU regions with the opportunity to show leadership and share best practices to extend and scale up their Blue Growth strategy in other parts of the world, and in particular through their island territories in SIDS regions.

Special Ambassadors of the International Year of Sustainable Tourism for Development:

- Mai bint Mohammed Al-Khalifa, President of the Bahrain Authority for Culture and Antiquities

- Michael Frenzel, President of the Federal Association of the German Tourism Industry