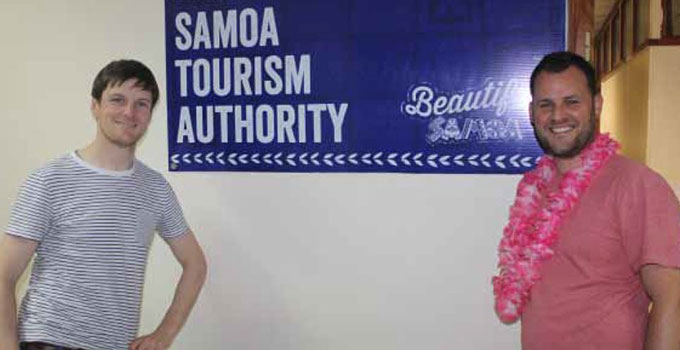 A team from one of the popular television stations in Wales, BBC Wales TV were in the country last week.

One of the proudest nations in the hisotry of the game of rugby, Wales has a long history with Samoa in this sport, most especially their shock defeat to Samoa during the 1991 Rugby World Cup at the famous Cardiff Arms Park in Wales.

“Samoa is such a beautiful place.” Said David Jones, one of the TV Reporters from BBC Wales, who was in the country with Video Journalist, James Pontin.

The pair have been around many tourist sites in the country, taking footage of some of the best scenaries in the world.

“This place is like a mixture of Juraisic Park and one of the best shampoos in the world.” Said Mr Pontin.

“It’s just beautiful.” David and James are only two of the hundreds of Welsh men and women that travelled all the way to support their rugby team that took on the Manu Samoa at Apia Park Stadium.

This is their first time to Samoa, and say they wish to visit again in the future.

“Regardless of the result, we want to visit your beautiful Islands again and bring our families and friends.” Said Mr Jones.

With a population of over 3 million people, BBC Wales broadcasted live within Wales the test match between Wales and Samoa from Apia, accompanied with footage taken by David and James from around the country.