Talofa Airways begins direct flights to the Kingdom of Tonga 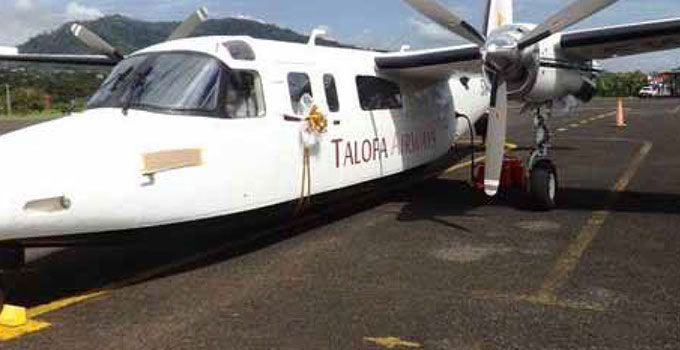 Talofa Airways began its direct flights to the Kingdom of Tonga on the 1st of July 2017. Four schedule flights per week - two from Samoa on Tuesday and Saturday and two from American Samoa on Monday and Friday (Sunday and Thursday Pago days) - are now available for sale for return or one-way fares.

Chief Executive Officer Tole’afoa Jeffrey Hunter said this is the beginning of a service they hope to develop in the coming years.

“Finally, and in less than one year since commencement of our airline operation, Talofa Airways is now ready to provide the much needed direct air services between Tonga and the two Samoas.” Said Toleafoa.

“It is my hope to expand this service to Niue, Wallis & Futuna and other neighbouring Islands.”

The flights to Tonga will not affect Talofa Airways’ daily flights between Samoa and American Samoa. Talofa Airways operate Twin Commander 690B model, a pressurized high-wing twin turboprop with a rugged design and plenty of power. With a roomy cabin featuring seating for up to nine passengers utilizing the copilot seat for the ninth passenger, the airplane is comfortable with air condition and has great visibility. Its rugged construction also is well suited for unimproved and short field airport operations.

In its early years in the late 1950’s, the US Air Force selected the Aero Commander due to its exceptional performance characteristics and was the first light twin engine aircraft considered safe enough for use as the personal transport for a US President.

Today, the legacy of proven and improved models that followed has kept to its mission purpose, to fill a significant void that exists in the Pacific for the needs of travelers and individuals who demands convenience, time saving, and equally important, the ability to provide direct service to those who travel to destinations not directly served by commercial carriers.