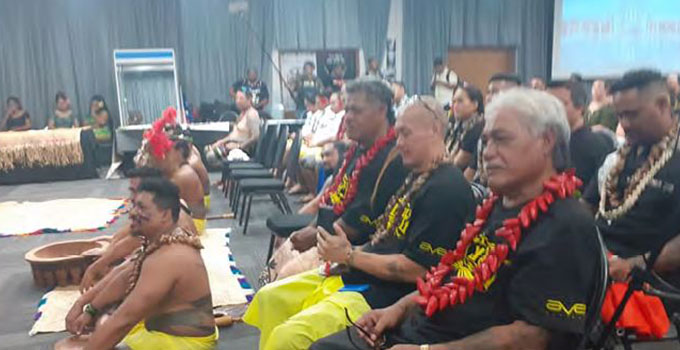 Over 40 tattoo artists from around the world were greeted with a traditional kava ceremony to mark the opening of the Tatau Festival Samoa hosted at the Taumeasina Island Resort over the weekend.

The Prime Minister, Hon. Tuilaepa Lupesoliai Fatialofa Dr. Sailele Malielegaoi officially opened this event, and spoke about the importance of this treasured and traditional art which originated from Samoa.

He also spoke about the importance of this unique part of the Samoan heritage, that fascinates any visitor to travel to Samoa.

The International event marked the official retirement of Samoa’s Master Tufuga or Tatoo artist, Chief Su’a Sulu’ape Alaivaa Petelo after a celebrated 43 years of pioneering the art of traditional tattooing in Samoa and around the world.

The Su’a Suluape family also honored 20 years since the passing of Master Tufuga, Su’a Sulu’ape Paulo II, who is being repatriated home after 20 years.

The event also brought to Samoa Polynesian singers and entertainers. including George Veikoso also known as Fiji, Rapi Mariner and other well known Pacific artists from around the world, and performed at a music Concert to conclude the Festival.

The tattoo exhibition was carried out during the three day event.