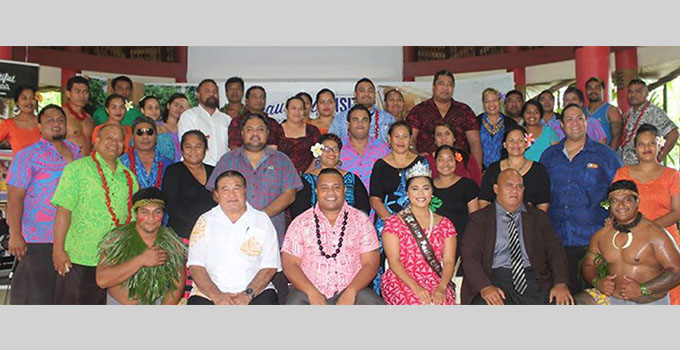 Miss Pacific Islands and Miss Samoa, Fonoifafo Seumanu was officially welcomed by the Samoa Tourism Authority (STA), in a traditional ava ceremony at the STA Fale in Apia.

“I’m fortunate and honoured to be accepted into this role with a huge amount of support from everyone, and I look forward to committing this reign to our beautiful Samoa and the rest of our Pacific nation.” Said Fonoifafo.

Upon her return from winning the Miss Pacific Islands title in Papua New Guinea at the end of last year, Fonoifafo got straight into the thick of things with the measles epidemic, utilising her skills as a registered nurse.

Before her crowning, Fonoifafo used to vaccinate children in Auckland where she practiced. Working during the measles epidemic gave her insights on how she can utilise her profile and this platform to reach out to the community.

“I’m hoping that through my reign, people will be more inclined to listening and digesting the health messages,” said Fonoifafo.

“It really helped me develop a deeper passion for my people and for my career to see where I was able to be of use.”

The Associate Minister of Tourism, Fagaivalu Kenrick Samu congratulated the Pacific Queen for bringing back home the crown since 2014.

Since the Pageant was established by the Government of Samoa in 1987, Fonoifafo is the 7th Miss Samoa to be crowned, and she will handover the crown in her home when Samoa hosts the Miss Pacific Islands Pageant at the end of this year.

Fonoifafo will work closely with Samoa tourism authority for the promotion of Samoa, and alongside the Ministry of Health in promoting the health messages and awareness.

She will also be travelling throughout the region for work with the Pacific Tourism Organisation (SPTO) in promoting the Pacific.