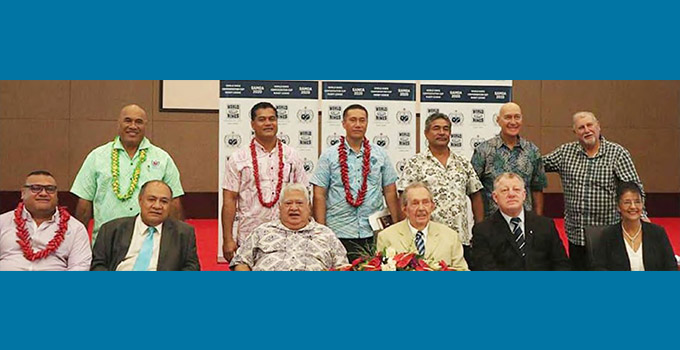 In promoting sports tourism and further improving this mainstay of its economy, Samoa this week launched the Inaugural World Nines Confederation Cup (WNCC) Tournament in Apia.

“While this will focus on international interest on Samoa as a sporting nation, it will also portray our capacity to host world events, and demonstrate the capabilities of our sports personnel and infrastructure that have made it possible to conduct and facilitate several international sporting events in the past.” Said the Hon. Prime Minister in officially launching the event.

“The magnitude of the World Nines tournament is the first of its kind in rugby league to be played on our home soil,” said Tuilaepa.

Tuilaepa also highlighted some of the crucial elements to justify the Government’s decision to host the tournament in Samoa this year.

“The tournament will benefit not just our athletes, as esteemed media coverage of Samoa as the Host County will benefit Samoa as a whole, while opportunities to expand knowledge of local coaches and referees in the rugby league code will be acquired at no cost. These were crucial elements in government’s decision to host this tournament in Apia.”

Scheduled for October this year, the WNCC will feature rugby league talents - both men and women from around the world and the Pacific. It is also a platform for players to improve their experience and skills in the code, as well as promote their careers through the exposure during the tournament.

During the tournament, National coaches from every competing nation will be in Samoa for the World Nines, and local coaches and referees will join each international team in a major coach refereeing and trainers’ up-skilling program.

The aim is to enhance their level of professionalism in officiating games and in coaching.

Here to promote the event is famous Australian rugby league broadcaster and administrator, Phil Gould, who said that his reason for coming to Samoa is twofold.

“Firstly to help my good friend Paul Broughton in the launch of the World Nines and also to learn more about Samoa.” Gould said. “This tournament allows for emerging nations and emerging players all over the world to compete, and it will bring a spotlight to rugby league globally as well as to Samoa.”

16 teams from different countries will participate both in men’s and women’s divisions, and will be televised and livestreamed throughout the world.