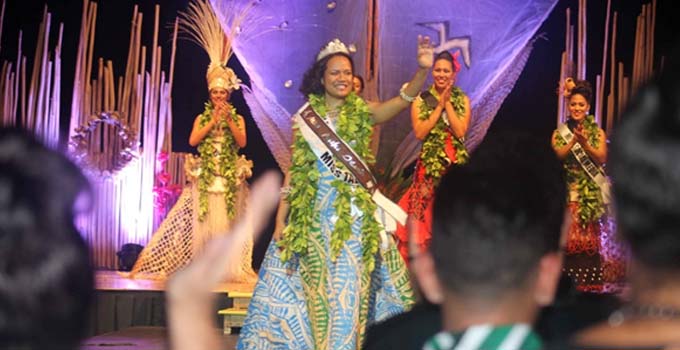 In the 29th year of the Miss Pacific Islands Pageant - ‘the Pageant with a Difference’, Miss Papua New Guinea (PNG) makes history and wins the region’s beauty contest for the first time, as she was crowned by Miss South Pacific 2014, Teuira Napa on the Crowning Night at the National Auditorium in Rarotonga, Cook Islands tonight, Saturday 12th December 2015.

Miss Abigail Havora, will be a household name in the Pacific within the next 12 months of her reign and many more years to come, as she looks to explore her new adventure and make a difference.

“Pacific Islands, we have a voice,” said Miss Havora in her victory speech on stage. “As Ms Sonja (Hunter) says, we own 50 million square kilometres of Pacific Ocean, we are a force to be reckoned with.

“I’m looking forward to the reign this year taking on from our previous queens and I know with God on our side, he will lead me well.” She added.

Miss Havora also thanked her pageant committee “for the opportunity providing a platform in Papua New Guinea and allowing us young women to stand up and speak up for what we believe in.”

The new Miss Pacific Islands won Best Talent and Best Sarong Wear in which she attributed all to the this year’s Pageant Theme - ‘Our Spirit of Adventure’.

At 24 years of age, the new Miss Pacific Islands hails from the village of Gabagaba in the Central Province of Papua New Guinea. She is a graduate in biology and chemistry from the University of PNG and is employed by Papua New Guinea’s largest oil and gas company Oil Search.

Below are the results of the Miss Pacific Islands Pageant 2015.

The Float Parade held earlier today was not judged.

The Miss Pacific Islands Pageant 2016 will be held in Apia, Samoa, celebrating 30 years since the inception of the Pageant.