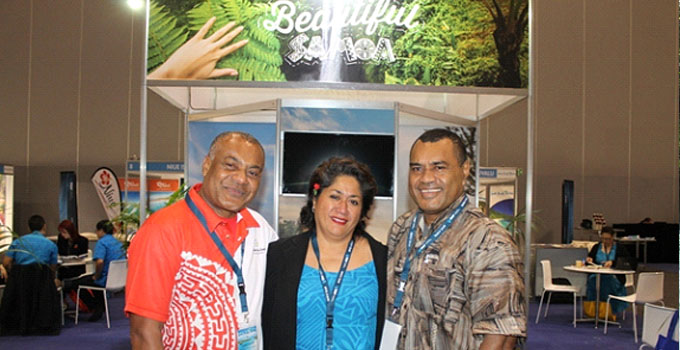 The long serving Chairperson who now serves a consecutive fourth term, was re-elected during SPTO’s Board of Directors’ meeting today, Thursday, 18th June 2015 in Melbourne, Australia.

Papali’i thanked everyone for their support and looks forward to continuing this very significant role.

“I am very grateful to all member countries for their invaluable support and trust in myself to continue this very important role.

“Also, I commend the SPTO Secretariat, CEO and staff for their ongoing hard work and I look forward to continue working with them and representatives of all member countries to further drive the organisation towards a brighter future for all.” Said Papali’i.

The new Deputy Chairperson is Mr. Josefa Tuamoto of Solomon Islands who takes over from Ms. Linda Kalpoi of Vanuatu. He acknowledged Papali’i’s re-election and also thanked everyone for their shown support in him as he looks forward to take up his new role.

The SPTO Board of Directors’ meeting discussed and reviewed a range of new developments and activities implemented by the organisation for the benefit of the region and its members. The meeting was held at the Holiday Inn in Melbourne.

Directors and representatives of up to 16 member countries from various National Tourism Organisations (NTOs) of SPTO attended the meeting, and are now prepared for the South Pacific Tourism Exchange (SPTE) 2015 which will be held at the Melbourne Convention Exhibition Center on Friday 18th to Saturday 19th June.